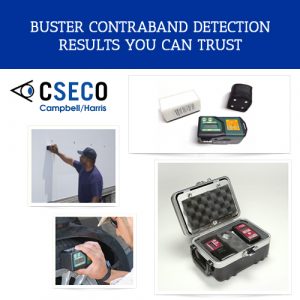 Campbell/Harris Security Equipment Company (CSECO) is known the world over for its high-quality and dependable Buster contraband detection tool and other equipment used for drug interdiction. While the company offers a wide variety of tools designed to detect hidden contraband, the Buster density meter remains its most popular product.

The Buster also happens to be CSECO’s first product, and it remains one of the most trusted density meters on the market for the purposes of contraband detection.

Frequent smuggling of narcotics, illegal substances, and other illegal items is a problem Customs and Border Patrol agents and law enforcement officers deal with regularly. They find items stashed in many parts of a vehicle – such as seats, head rests, tires, dashboards, and gas tanks – where direct inspection does not allow officers to detect these objects easily. Dismantling the parts of a vehicle is a sure way to confirm whether those smuggled items are concealed but doing so can damage them. Those were some of the reasons why the Buster density meter was created.

CSECO was established in the 1980s. Its founder, Patrick J. Campbell, had over 35 years of experience with developing and designing tools that safely utilized radioactive technology. He had developed an earlier device, a soil gauge, which helped measure the mass and density of the soil to determine if it was safe to build railroad tracks and roads based on those measurements.

Campbell later used the same technology while he was still developing the Buster. The only significant difference is that he utilized the same complicated technology that dealt with the radioactive source but made it simpler so it would allow a non-technical person to use it. Campbell collaborated closely with the intended end users – the Customs and Border Patrol (CBP) agents – who made substantial contributions during the time when the Buster was still being developed, and then applied the prototype by field-testing it.

First, the Buster’s sturdy design protects it from impact (e.g., when accidentally dropped on the ground) and other harmful external factors. The LCD screen is also reinforced with tough glass that withstands against heat and scratches, leaving the screen clear to read.

Now, let’s get to the nitty-gritty of the Buster. From the first time that it was introduced up to now, the Buster has used the same technology: low intensity gamma radiation and scintillation detector to scan vehicles and other items quickly for hidden contraband.

As you scan the suspected object using the Buster, the low intensity gamma rays penetrate the object up to six inches. The Buster’s “back-scatter” technology allows the rays to bounce back toward the Buster, which in turn establishes the density readings. If the Buster acquires density readings that are higher than normal, it is an indication that an object is likely to have something else stuffed inside it. For instance – if the Buster scans a usually hollow object, such as a spare tire, and acquires unusually high readings, it means that something is stuffed inside that tire. That “something” could be a bundle of narcotics or cash.

The Buster uses both visual and audible readouts to alert users to the presence of contraband. The Buster can quickly zero in on the specific location of concealed items such as drugs, cash, weapons, or collectibles so they can be seized and kept off the streets.

Despite the sophisticated technology that it uses, the Buster is otherwise user-friendly. However, CSECO offers training to its clients who have purchased the Buster.

Results that you can trust.

With the Buster’s durability and foolproof technology, CPT and police officers have had many successful seizures of billions of dollars’ worth of narcotics (such as marijuana, cocaine, and heroin), cash, weapons, and even explosives, as well as arrests of the smugglers.

One instance of successful operation using the Buster was in two separate incidents in August 2004 in Nogales point of entry in Arizona, where CBP agents seized 344 pounds of cocaine and more than 15 pounds of methamphetamine. The cocaine alone was worth $6.8 million. CBP officers used the Buster density meter to inspect the dashboard of the 1998 Ford Windstar, which showed signs of tampering.

The Buster is also dependable when it comes to safety. The latest version, the Buster K910G, has no lead-based components and its radioactive source is now 25% smaller than any other density meter. These safety features make the Buster the safest density meter, both for users and the environment.

It’s little wonder why the Buster contraband detection tool is hailed as the “gold standard” of contraband detection. Plus, the fact that the CBP agents themselves had contributed to the Buster’s early development and design makes it as one of the most trusted density meters today not only in the US, but also in many parts of the world.