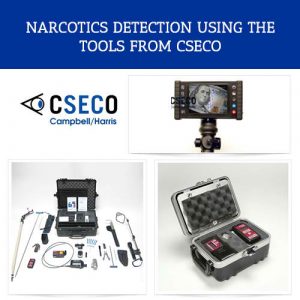 Narcotics detection is important for those fighting the war against drugs. With the number and types of drugs such as mushrooms, meth and more growing detection is very important.  US Customs and Border Protection (CBP) officers, drug interdiction officers and other law enforcement agents tasked to weed out drugs need the right tools to succeed.

Campbell/Harris Security Equipment Company (CSECO) offers many contraband detection equipment that helps these men and women locate and seize contraband – whether it is narcotics, cash, weapons or any other items that were hidden.

As CSECO has grown over the years, its line of products has grown and expanded but the Buster density meter is the company’s first and flagship device. The first and the original Buster K910B was designed and developed with company founder Patrick J. Campbell, with the direct input from the CBP agents with whom he closely collaborated.

The Buster K910B density meter became successful and received immense support from the majority of law enforcement agencies in the country. Since it first came out, contraband detection had never been made easier, quicker and more accurately. For the first time, customs and border patrol agents did not have to disassemble parts of a vehicle which could have cost them a lot, not to mention it could have also caused potential damage.

CSECO has already given CESCO the latest update to the Buster K910B, which is the all-new Buster K910G. In terms of basic functions, the K910G performs in the same way as the original K910B. It still has the same low-intensity gamma radiation and scintillation detector, which enables quick but thorough precise inspections on vehicles that they’re inspecting. The Buster K910G is still used to inspect various parts of a vehicle, most commonly the gas tank, dashboard, spare tire, flooring, and seating. Using the Buster, officers can finish inspecting an entire vehicle within five minutes.

The Buster K910G can also be used to scan and inspect other items and areas such as walls, furniture, cargo, and a lot more, which are suspected of carrying hidden contraband. Its versatility, as far as density meters go, enables the Buster K910G to scan and detect concealed items through various materials like wood, metal, or reinforced plastics without causing them external damage.

Unlike other contraband detecting devices that use millimeter wave, radio wave, ultra-violet or microwave technologies, the Buster can identify various hidden materials such as narcotics, cash, jewelry, weapons, and explosives.

Unlike the Buster K910B, the new K910G is made safer. The lead-based components are now removed, and the K910G now has a radioactive source which is 25% smaller than that of its nearest competitors. This makes the Buster K910G the safest density meter on the market! The components are also updated and improved to enable faster electronics.

If you need a visual aid to go along with your Buster – and you really should – the Perfect Vision V20 Videoscope Inspection System is the answer. Unlike the leading fiberscope where you have to squint your eye to the eyepiece, the Perfect Vision V20 Videoscope comes with a large (5 inches), multi-directional high-resolution color LCD. The large monitor enables you to look into the suspect area more clearly, without losing visibility of your immediate surroundings. The LCD also features a push-button dimming and digital zoom that is ten times higher than the resolution of the leading fiberscope.

Like the fiberscope, the Perfect Vision V20 Videoscope features a long, bendable, and fuel- and gas-safe articulating shaft, with a powerful built-in, LED light that allows inspection in darker areas.

Here is a brief information about a few other products in the kits:

These efficient and safe-to-use narcotics detection tools from CSECO will provide significant aid to those who inspect for narcotics and any other hidden contraband.